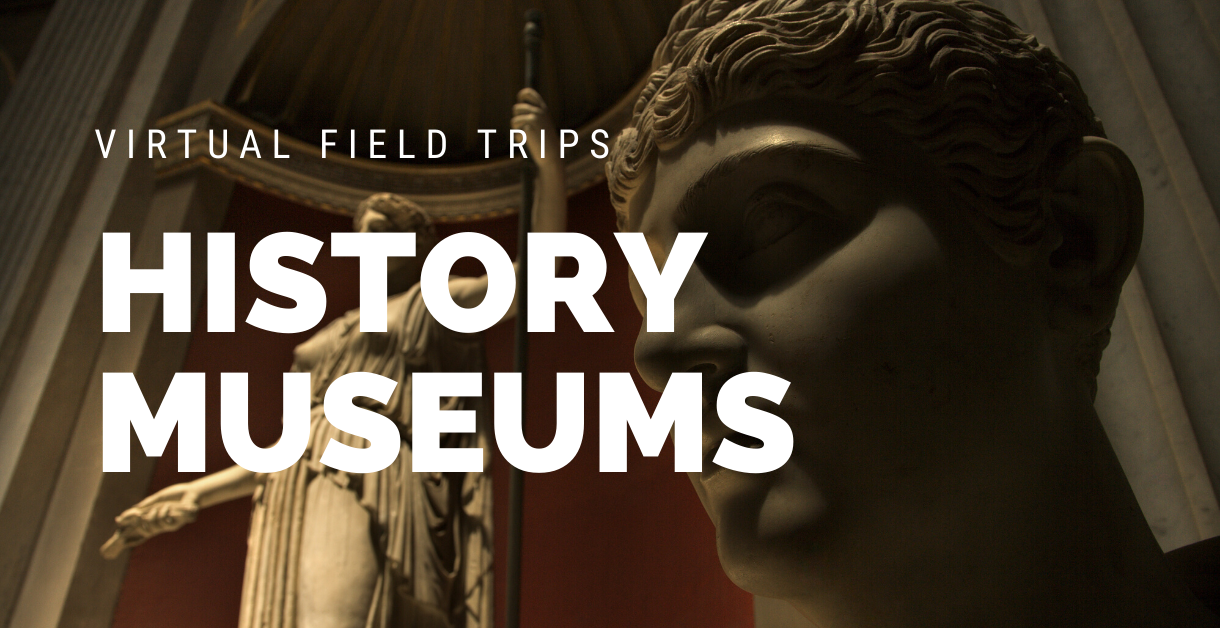 There are thousands of fabulous history museums all around the world, many of which you can visit virtually with a quick internet search, so we rounded up a few that you may or may not yet have thought of to check out.

Museum of the World – Travel through time with this interactive online museum in the form of a timeline that features historical artifacts across the continents. Explore the objects from the British Museum though images, texts and audios.

The Vasa Museum – At this museum in Stockholm, part of the Swedish National Maritime and Transport Museums, discover the history of the 17th century warship, Vasa, which sank less than a mile into her maiden voyage. After the cannons which were on board were retrieved some 35 years later, the ship remained stuck in the mud approximately 32 meters below water for over 330 years until is was salvaged, mostly intact, in 1961.

The Vatican Museums – Using the 360° virtual tours, explore the Sistine Chapel, various rooms, and museums in Vatican City as well as take photo and video tours of archaeological areas, works of art and much more.

The Basílica de la Sagrada Família – Located in Barcelona, Spain, this Roman Catholic basilica has been under construction for over 130 years and has a tentative completion date of 2026. This building is not only an architectural wonder, it has a rich and interesting history.

Smithsonian National Museum of American History – Learn American history with another great Smithsonian museum. There are 100 thematic online exhibits to explores, each of which include images, informative text and more.

American Battlefield Trust – To go along with your American history tour, check out these 360° tours of battlefields from the Revolutionary and Civil wars. You will also find lesson plans and other resources to use in your studies under the "Learn" option in the upper menu.

Memorial Hall Museum Online – American Centuries: Views from New England – This website is another wonderful American history online exhibit that not only includes artifact collections to explore but also has lesson plans and activities to use in your classroom. Use the link at the top of the sidebar to visit a sister site called Impressions from a Lost World that shares discoveries of dinosaur footprints in New England.

Anne Frank House – If you have not had the opportunity to visit this site, it is a must see for certain. Take a 360° tour of the family home as it was prior to them going into hiding. Then locate the "Anne Frank" link in the upper menu and select "The Secret Annex" to an interactive virtual tour of where Anne, her family and others spent 2 years hiding during World War 2. There are also educational materials available and more.

The United States Holocaust Memorial Museum – Continue your studies of World War 2 and the Holocaust with the images, texts videos and more through the interactive online exhibitions at this museum.

Eternal Egypt – While not a physical museum, this is a noteworthy website to visit that uses interactive and multimedia tools for visitors to examine Egyptian artifacts, explore a 3-dimensional reconstruction of Tutankhamun's tomb and much more.

Looking for more historical places to visit online? Check out HistoryView VR to find locations around the globe. Some site visitor favorite tours include the Titanic, the Amazon Rainforest, Mayan ruins, Le Mont-Saint-Michel and many more.