Football and Education: Perfect Together 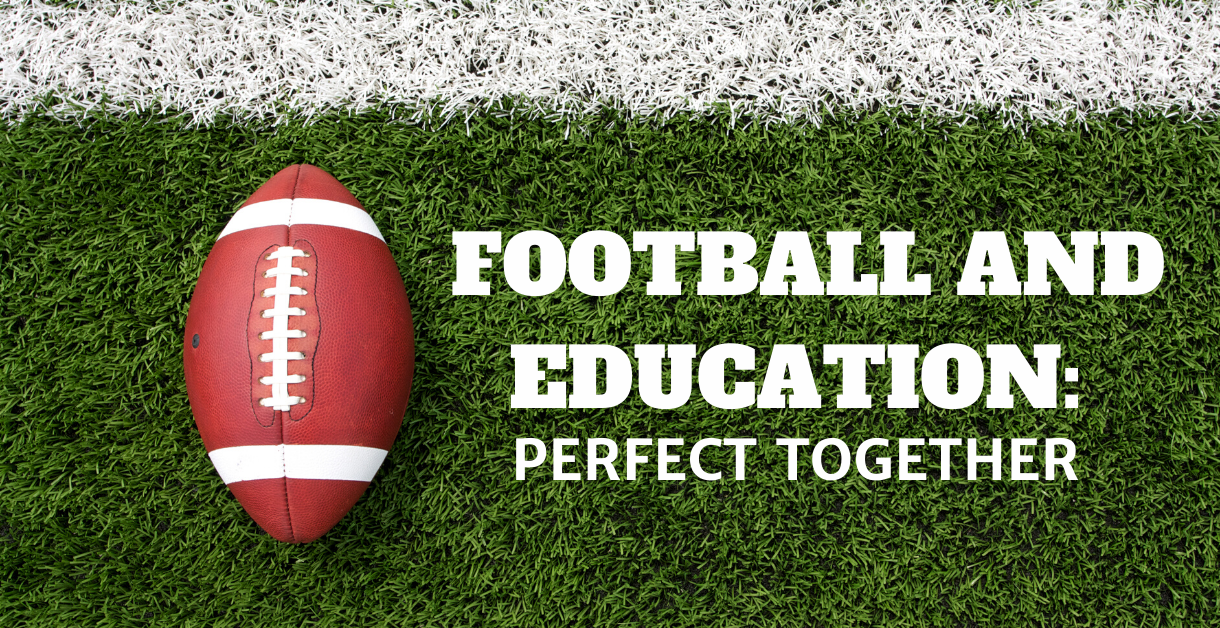 Football is physics in action! Physics is the study of the motion of matter through time and space. It is also the study of the forces created by this interaction. A force is a push or a pull that makes something move. There are different types of forces in action in football. What happens when a player kicks a football? The player applies a force that makes the football fly above the ground. What about a quarterback throwing a football? This is another example of a force that makes the football fly. 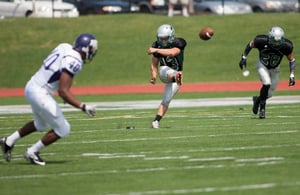 There are plays in football that illustrate each of Newton’s Laws of Motion.

• Newton’s First Law of Motion – The Law of Inertia, tells us that the football will stay at rest unless someone or something (like a player) moves it by a specific force (like kicking or throwing). The Law of Inertia also states that an object (like a football) will stay in motion unless it is acted on (or stopped) by an external force (like gravity or a player catching it).

• Newton's Second Law of Motion: The Law of Force and Acceleration tells us that the force on an object is equal to the mass of the object multiplied by its acceleration. Newton’s Second Law of Motion can be used to determine the best angle for the football player to apply the force on the ball so that the ball does what the football player wants it to do.

• Newton's Third Law of Motion tells us that for every force applied there is an equal and opposite reaction force. Think about a player trying to catch a football from a high kick. The football, coming down from above, exerts a force (a push) on the player. When the player catches it, he exerts a force. This catching force is equal in magnitude (or strength) to the force that the football exerted on the player. The catching force is in the opposite in direction. Thus, the player slows down the and brings it to rest.

STEAM and the San Francisco 49ers 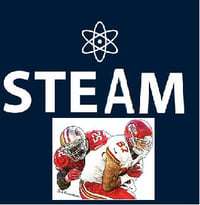 Did this title surprise you? It's about a connection between the San Francisco 49ers football team and a STEAM (Science, Technology, Engineering, Art, and Mathematics) program.

The 49ers STEAM Education Program for K-8 students started in 2014. Every year the program reaches over 60,000 students; many are in Title I schools (where there are a significant number of low income students).

The theme is that STEAM concepts apply to real life - in this case – football. For example, how do the principles of force and movement relate to a football in flight (Physics)? What kind of technology is used in a stadium? (Tech) How are football helmets designed? (Engineering) How many footballs can fill a football stadium? (Math) How are colors and designs selected for uniforms? (Art).

Five days a week the 49ers host about 300 students. Students participate in hands-on activities to inspire STEAM literacy. They have access to interactive tables, which actually are big I-pads, magnetic walls and dry-erase tables they can use to draw designs.

During a field trip to the 49ers Museum, students access free hands-on, project-based learning opportunities that focus on real world problems. For example, students learn how to sustain the environment, via solar energy and water recycling. They become engaged in technology- based experiences. Ultimately, they become more motivated to learn STEAM subjects.

In case you think the program is all work and no play, the kids often get to meet 49ers and to play on the field.

Harriet Isecke, an award-winning author and educator, is the founder, creator, and CEO of Readorium. She served in public schools for over 38 years as curriculum director, literacy coach, teacher, educational consultant, and grant writer. She's been listed four times in Who’s Who Among American Educators. Harriet earned a BA in History from the University of Michigan, and two Master’s Degrees: one in Learning Disabilities, and one in Educational Leadership.

Dr. Evelyn Wolff has been the Research Director of Readorium since 2011. She is involved in all aspects of the research, development, and support for the Readorium's programs. Evelyn earned a PhD in Sociology from City University Graduate School in NYC and taught sociology classes in various colleges in the New York City metropolitan area. She also served as a Grant Writer/Coordinator for two public school districts.

Save 20% HERE on award-winning Readorium at the Co-op. Plus, until 1/25/2020, receive 3 bonus months with your subscription.