What is a Typical Homeschool Day? 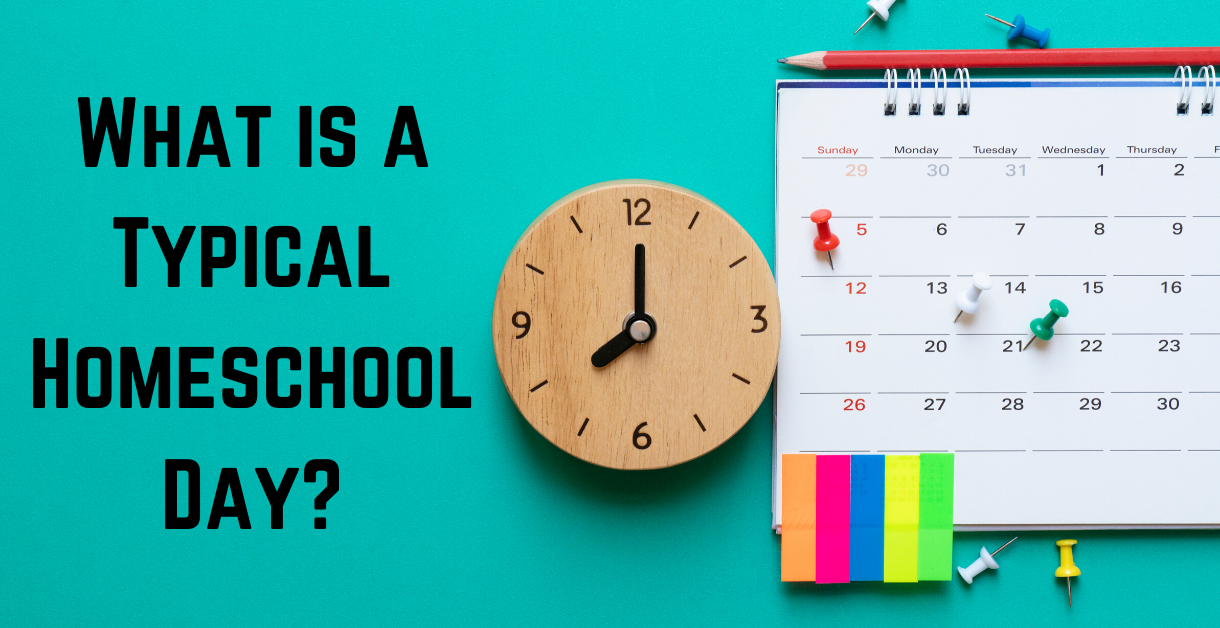 If you have ever asked someone what a homeschooling day looks like, you would probably get a huge variety of answers. Just as no two families are alike, no two homeschools are the same and that includes the entire process of homeschooling. Some folks follow a strict schedule and routine while others fly by the seat of their pants. Most fall somewhere in between.

While it has been a few years since my baby graduated from our homeschool, this is pretty much how typical days in our homeschool played out.

Morning school time: For most of our homeschool years we followed pretty much the same pattern for the order in which I laid out assignments: Bible Study, Math, Language Arts, History, Science, then electives. Bible Study, Math and Language Arts were always done first thing in the morning.

Lunch: When the kids were in elementary school, we usually prepared and ate lunch together and then spent a little time outside playing, weather permitting.

Afternoon school time: If we had not finished everything in the morning, afternoons were usually spent on History, Science, and electives. The curricula we chose for these subjects were much more hands-on than the other subjects and there was a more relaxed atmosphere in the classroom while doing them. Many times, weather permitting, we would take our studies outside the classroom, often incorporating field trips into them.

End of the school day: We usually ended our school day when all the assignments for the day were completed. In the elementary years, this often meant we were done by lunchtime or shortly after.

Wake-up & ready for school: By the time the kids were in high school, this routine changed mostly because it became more of a challenge to wake them and get them motivated. I lightened up on the "in the classroom by 8" routine and often was thankful I saw them by 10:00 (or later) after multiple wake-up calls. Some days, getting dressed was optional.

Morning/Afternoon school time: As my children became more independent in their studies, they were allowed to choose the order of most of their subjects except that Math and Language Arts always had to be done first. For my children, these subjects required more assistance on my part, and they seemed more receptive to information earlier in the day. Additionally, I was also working from home, so this worked well with my work schedule.

Lunch: For my teens, sometimes lunch was actually breakfast for them and it was mostly "fend for yourself" style.

Afternoon time: All my children had jobs while in high school, so they spent most afternoons/evenings at work. If they had not finished the day's assignments before work, they were required to complete them when they got home.

End of the school day: Same as in elementary school, our school day ended when all the assignments were done. However, there were times when it got late into the evening or the frustration level had reached its peak, at which time, I just called it a day and moved the unfinished work to the next day. Sometimes, the kids would keep working after I had gone to bed (they were typical teen night owls) and other times they would actually get up early the next day. And still there were times when schoolwork was moved to the weekends in order to stay on track.

These routines worked for us and I have not seen any indication that strict or relaxed scheduling has had any major impact on their adult lives.

Because there are so many factors that play into a homeschool day and it tends to evolve as circumstances change, the best option for any homeschool family, as it is in just about every single homeschool option, is to find what works for you.